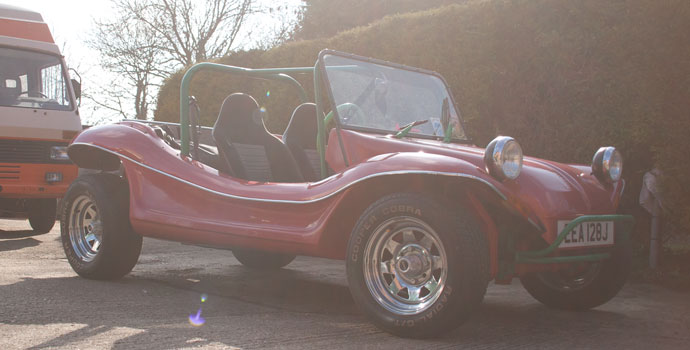 On a rare sunny and warm February day Dad got the beach buggy out of it’s garage. It’s still gleaming in it’s raspberry red flake finish and huge chrome wheels. 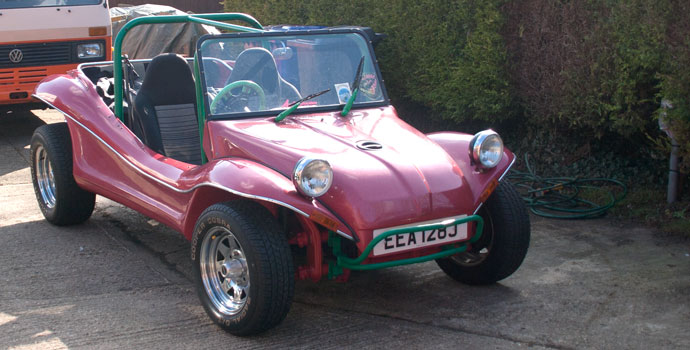 The car was converted from a scrap beetle in 1989, we went to Basingstoke to collect the body kit from the maker, not sure what sort of model it is or exactly what the beetle donor car was. 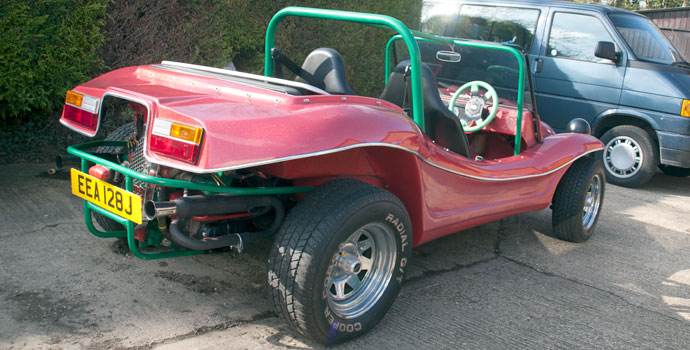 Looking at the engine it’s a twin port, looks like an old T2 engine. I think Dad made the roll cage and the engine cage. There is a wet weather hood for it too, just in case.

The new rock and roll bed is now fixed down, plenty of room for the repositioned water tank below it. Some of the old timber from the kitchen area will be used to conceal the tank.

The tank is held in place by wooden battens, these are much more secure than the two screws that Reimo decided where adequate for the job. 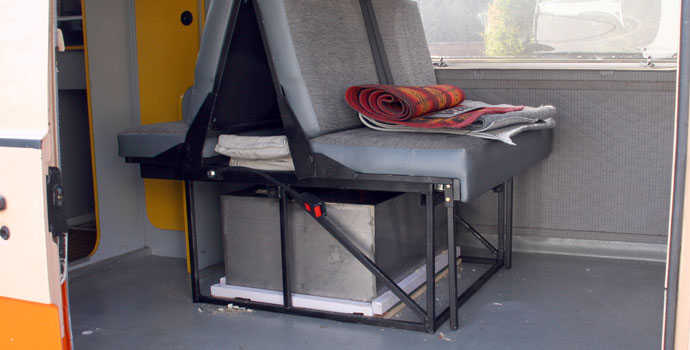 The area of the van that was once the kitchen is now almost finished. Dad has boarded the walls and fitted the new custom made (by him) spare wheel bracket. 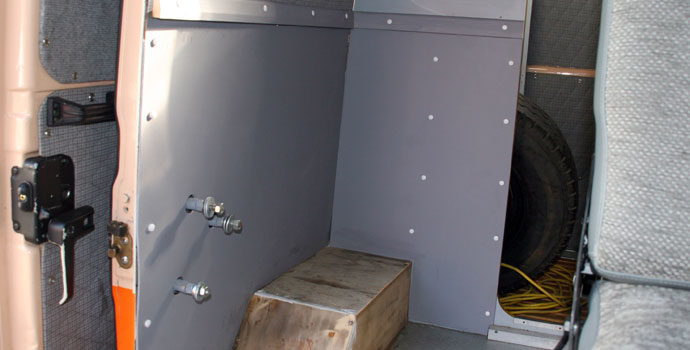 Outside we have a growing pile of all of the old items that we removed from the van, the old water heater, electrical charger unit, kitchen sink and hob with all the gas fittings, gas tank, waste water tank and even the shower tray, all junk now. 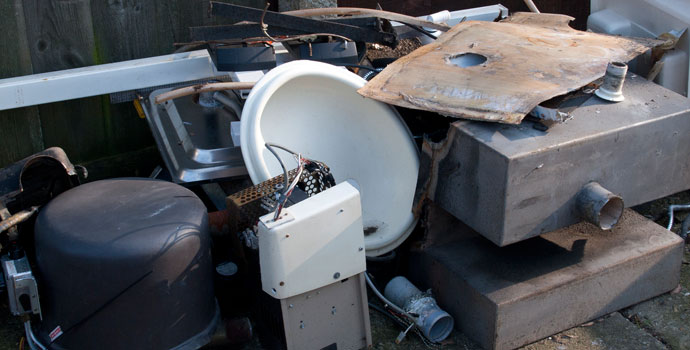 Looking more closely at the mains hookup battery charger unit we could see that it is a total hazard, probably quite dangerous. It looks quite clean now but when we removed it it was covered in dust a fluff, there are some bare wires in there as well. I am pleased this is gone. We fitted a new RCD twin socket and intend fitting a 12v battery charger under the rock and roll bed to maintain the leisure battery. 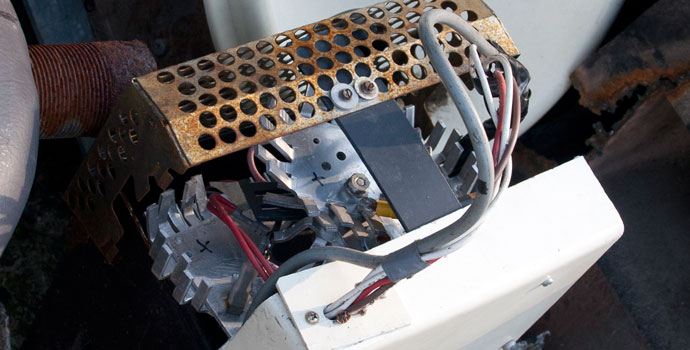 The new front springs for the van arrived and dad set about fitting them. As most of the front had already been apart and replaced it was quite a straight forward job. The old springs where much shorter than the new ones. 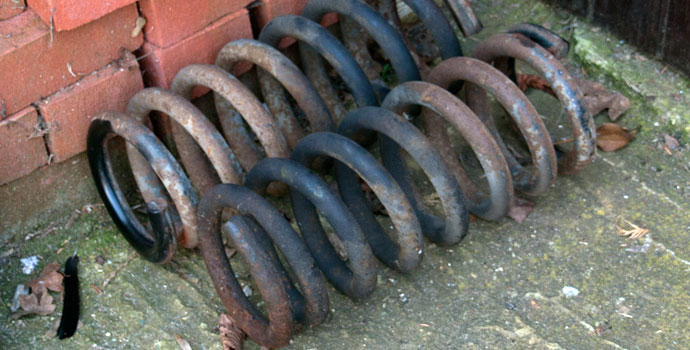 With the new springs installed the van is now much more level, the water should run of the roof at the back now rather than collect in the roof mounted pool. 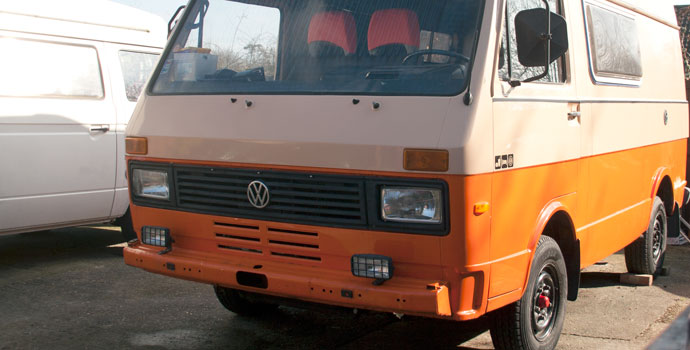 More on the interior work in the next update… 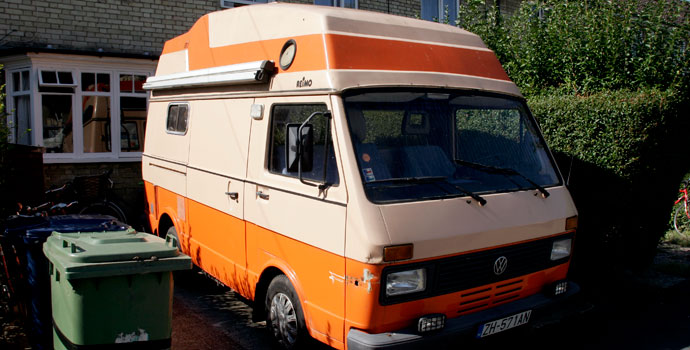 This van is a work in progress. Lots more pictures of the works in the Flickr Photostream.

The van is originally from Italy via Slovakia. The van arrived in Cambridge in 2010, failed two MOT tests and was stored on the side of the road until it came up for sale in September last year. I managed to buy it within minutes of it being put up for sale, a bargain at £500 despite all of the problems.

First thing to do was give it a very good wash, there was a lot of moss and mould all over the outside, two good washes later, first with some kitchen cleaner then with lots of wash and wax the outside was looking good and started to reveal the work that needed doing, basically a bit of bodywork here and there. 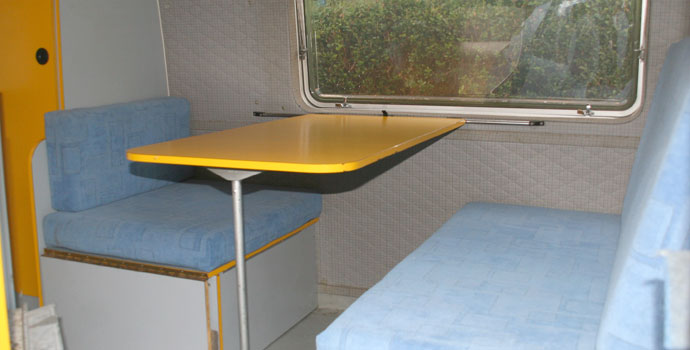 Inside it was hiding what seemed like a lifetimes worth of rubbish and grime. Early on I decided that the internal layout, while functional and in a 1980’s Italian colour scheme, was not really very useful and actually very unsafe, no seat belts and not ideal for travelling. The seats, table, cooker and sink where removed and sold, the seating made £50 on eBay. More on the interior later.

Mechanically the van was quite good, looks like it had been quite well maintained over the years. Initially I decided to renew everything to do with the brakes, the four tyres and quite a lot of the suspension and steering. After getting my Dad to look over everything (he is someone who knows about these things) we decided to keep the front discs at they are quite new, the rear drums where not distorted and out of shape so they stayed too. All four tyres where perfectly serviceable, so we kept those. Looking at my supplier of choice, eBay, I managed to get most of the brake parts ‘New Old Stock’, three wheel cylinders, two sets of rear shoes and front pads for £35. We decided to fit all new hoses, not really necessary but while it was being done… 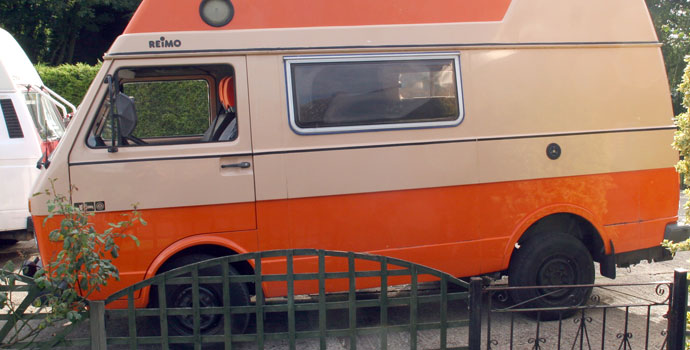 The front springs looked a little tired, so a new pair of stock springs where ordered from the local car spares shop, around £125 I think, still to be fitted but they should level things up, might even be able adjust the new replacement right hand drive headlights now. I got the new headlights, additional LT28 front trim and a new diesel cap from an eBay seller for £60. 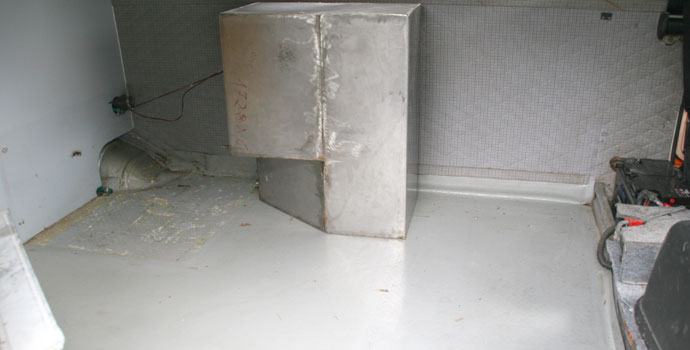 Inside the van looked quite empty with the selected furniture removed, obviously spacious and ready for a new layout that works the way I want. I could see no reason to repair the hot and cold water system, toilet, gas heater, original cooker and sink etc, they had all had their day. I wanted to retain the upper bed and all of the cupboard space so left those well alone. The waste water tank and gas tank from the underside where also removed as they served no purpose in the layout. 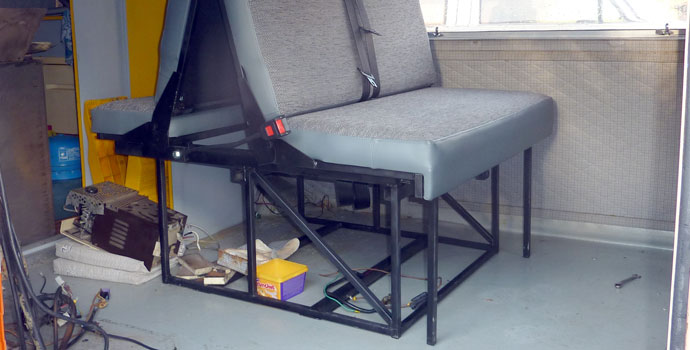 I measured and sketched a new custom rock and roll bed, designed to fit within the space between the rear bulkhead and the front seats. It had to be high enough to conceal the stainless steel water tank and leisure battery installation below, long enough to sleep on when extended and safe enough to travel on with integrated seat belts. The bed was made by MKCampers, we visited in November 2011 in the T4 and collected it, it was a snug fit, but it did fit. 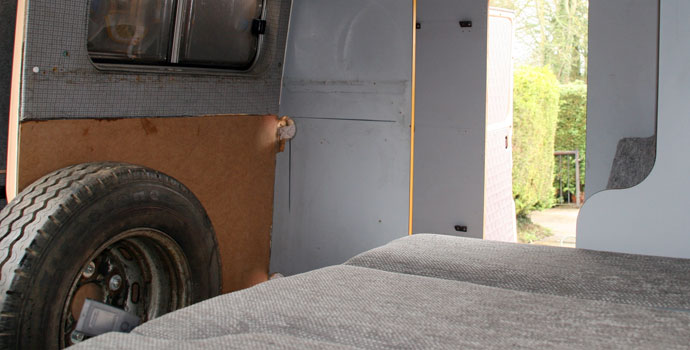 When the van arrived there was no place for the spare wheel, after a lot of consideration it was decided that the wheel would have to live inside the van. The rear door hinges are just not up to the job of holding a heavy wheel, mounting on the front is not an option, in temperatures of 30+ degrees all the air is needed to cool the engine. We decided that the wheel would fit inside the sliding door, near the door pillar and be covered with a custom wheel cover, just like the one in my old 1971 Bay Window Devon Moonraker. Dad made the bracket and fitted it, works very and even has a new custom made wheel cover, more on that when it’s fitted. 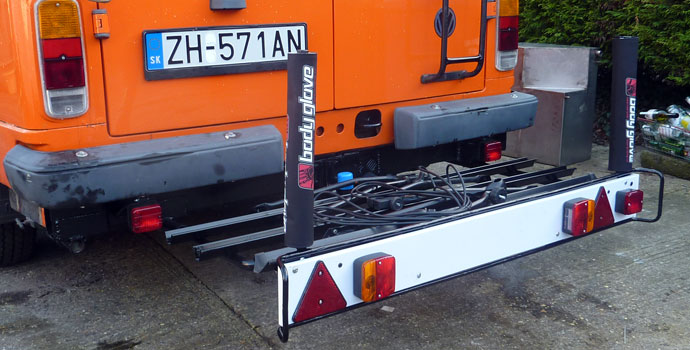 The van came with a rear mounted cycle carrier that had seen better days, I needed to have a solid carrier so the rack was modified to take three bikes and include a light board with the required reflectors. An additional cycle channel was ordered and fitted. 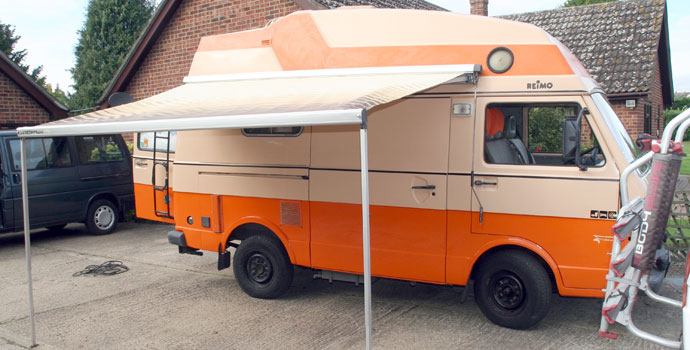 The awning that was fitted to the van was in fairly good condition, only need a few minor repairs, the awning is very big, almost big enough to get my T25 Westfalia Joker inside it. It fair to say that the van is huge compared to the T4 or the T25, it remains to be seen if the space is as useable as the Joker. 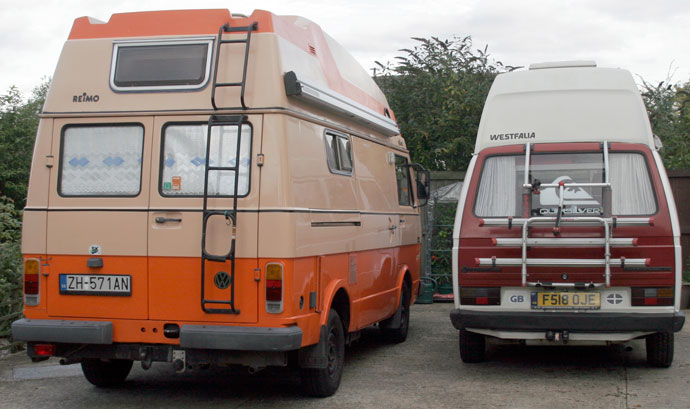 There are many more pictures on the Flickr Photostream

These web pages are an attempt to draw together all of the other things that I do, things that I am interested in and the stuff I obsess about. If you want to talk to me about any of it, feel free…

The most recent updates are over on the VW LT28 page where you can see the progress of my latest VW camper van project.