In October 2019 we set off for Amsterdam, choosing bicycles we made our way along the cycle routes of South Holland. Travelling slowly, cycling is meditation, a way of life and a way to reconnect.

From the early morning ride through the dunes towards Scheveningen with the lycra-clad speed freaks on carbon machines. Onwards to Den Haag and the cycle-shoppers with their baskets. Along the long straight roads that lead towards and past Schiphol airport and the deafening noise of planes from who knows where, into Amsterdam and Vondelpark and the chaos of cycling inner-city style.

A day to explore, the Jordaan of course, walking the streets and talking, making pictures and plans.

Leaving Amsterdam as the sun comes up, the wind is a mighty 45km/h full on headwind, 100km to go. Onwards towards Leiden, Den Haag and through the carefully constructed urban wilderness of the Haagsee Bos with commuters and prams. Approaching Hoek van Holland as the sun goes down, exhausted from the relentless wind. Satisfied.

This short film was made from the handlebars, conceived as a memory but so much more. Riding fills our heads with thought and mine with music, I remembered Seasons, this is Autumn but there are always thought of Spring and Summer. The serendipitous juxtaposition of the visuals with the early 70’s soundtrack is magical, at every musical juncture there is an extraordinary synchronicity with the hypnotic visuals, press stop at any point for a still, a silent moment in time on the journey.

Having owned the Danelectro Longhorn Bass for about 15 years it’s about time it got a few new parts. The bridge on these is really quite poor (I know, the whole guitar is quite poor but the bridge is worse) and there are many upgrades and replacements around, I went for a standard Fender Precision style one with the strings anchored on the bridge, not through the body. The body is made out of ‘joinery grade (yeah, right)’ MDF, so not much of a solid body guitar, which means not much resonance, anchored at the bridge will be fine.

The machine heads are not very robust, the heaviest strings had started to loose their ability to stay in tune and some careful inspection revealed that the condition of the machine head inside the cover had detriorated sufficiently to simply slip just short of being in tune.

I found a set of 2L and 2R machine heads for under 7 pounds, those will do. Fitted them and the guitar is now transformed, it stays in tune, the intonation is almost perfect, if only the frets where in the correct position it would be 100%. I fitted some light guage strings to the bass, ideal for a short scale guitar.

I seem to remember that I paid 99 pounds for the bass new, not quite my ’72 Fender Precision but it is a very playable instrument.

Finally we have the video done and thanks to Barney it’s come together really well.

With just about a week to go before the ‘Folk in Autumn’ gig at the Cornerhouse in Cambridge it’s time to go back into the archives and play something from gigs gone by.

This time it’s from the 2010 Ely Folk Festival, The Plough and the Well.

I spent a few days last week with my cameras and audio kit in the Faculty of Music at a series of events with Robert Levin.

The three events where recorded for CRASSH and the Academy of Ancient Music. This video is the first to appear from the sessions. Not normally my thing this old-school piano stuff but this is very special. 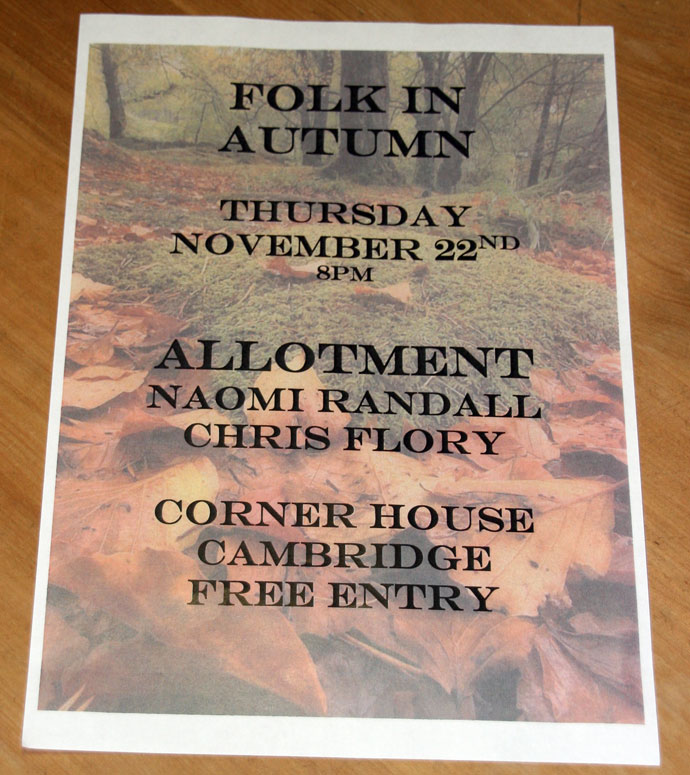 The first is the Folk In Autumn session at The Corner House on November 22. Along side Allotment on the evening will be Naomi Randall and all the way from Ipswich, Chris Flory.