We spent the weekend of July 20 in Cornwall at the Port Eliot festival. The drive down on Thursday took around 8 hours from Cambridge, similar amout of time to return. 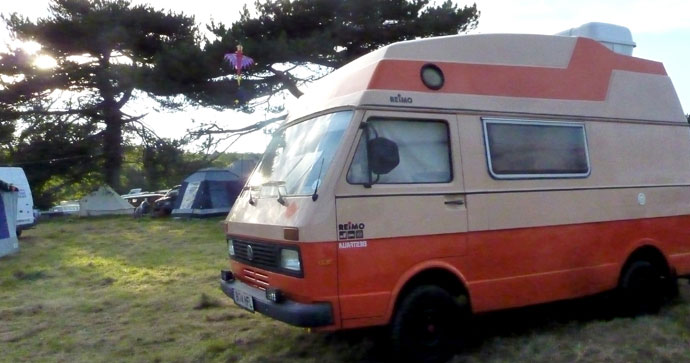 With the diesel leak fixed by fitting a new pipe direct from VW in Germany it was time to test it on a long trip again. Fuel economy was OK, about £150 for the 800 mile trip.

We saw very few LT vans on the way down and from what we could see ours was the only one in the camper fields, lots of passing interest in the van all the time we where camping in it.

While we had the Westfalia we still got waves from other VW owners, Type 2 and Type 25 alike, having visited a lot of VW festivals over the years the ‘enthusiast’ ownership it certainly growing. We still have a Type 4 Caravelle but I choose that for work rather than travelling.

It’s an interesting thing owning a VW van, I have had one since I was 18 in 1988, the first was a VW Type 2 Devon Moonraker bought for £1000 and included a whole other Type 2 for spares. In 1988 there was still a sense of doing something different by owning a VW camper and travelling all over the place in it, I took mine to Glastonbury and numerous other festivals until I sold it in 1992 to get a 1972 VW Panel Van.

Why did I sell the T25 Westfalia? I wanted to do something different, owning an LT is odd enough, a bright orange one, even better. This LT as far as I have seen is unique and certainly gets looked at, and laughed at.